Archie Wylie of Lochview Golf Club claimed the Carnoustie Golf Links Senior Open overall scratch title. His score of 71 over The Carnoustie Buddon Course was an excellent effort given the tough conditions of wind and rain. He managed to beat 122 other competitors, winning by one stroke from Gordon Macpherson.

In the overall net category, Graham Box of Stirling Golf Club claimed the victory with a magnificent score of 3 under par, 65, beating Geoffrey Seaman on a back 9 countback.

There were also prizes for the top three places in two age categories (Aged 55-64 and Aged 65+) for both scratch and net. The winner of the age 55-64 scratch prize was Gordon Macpherson of Murcar Links Golf Club with a score of 72 (4 over par), with defending champion Scott Spiers coming second with a score of 74 (6 over par). 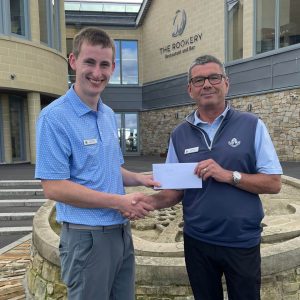 In the age 55-64 net competition, Carnoustie Golf Links employee and Station Masters member, David Stewart came out on top with an impressive net score of 66 (2 under par). He beat Terry Doherty of Whitecraigs Golf Club by one stroke.

The 65+ scratch prize was won by Jim McArthur of Crail Golfing Society with a score of 77. He managed to hold off John Hope of Campsie Golf Club and another Carnoustie local and captain of The Carnoustie Caledonia Golf Club, Alex Wallace.

The 65+ net prize was claimed by Geoffrey Seaman of Dunblane New Golf Club who had been beaten earlier on a card playoff to the overall net prize title by Graham Box.

Congratulations to all our prize winners!

The Carnoustie Senior Open will return next year and details of the entry for this competition will be published in early 2023. With a sold out field this year, we hope to see as many golfers returning for 2023.

Pictured above: David Stewart, winner of the age 55-64 net competition.