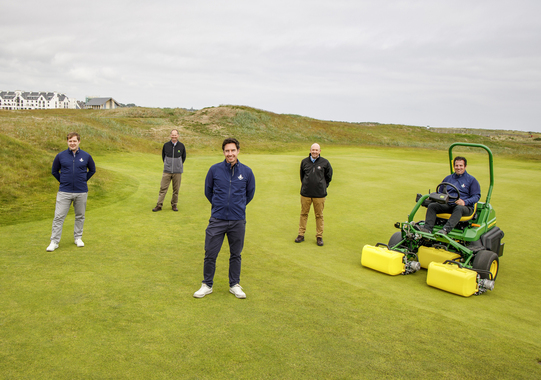 Carnoustie Golf Links Chief Executive Michael Wells announced today that a strategic partnership with John Deere has been secured, following a detailed period of exclusive discussions between the two organisations, whose joint vision laid the groundwork for today’s announcement.

The formalisation of the partnership will harmonise flagship greenkeeping practices with leading technology and R&D, as this alliance looks to lead the conversation in sustainability and best practice in golf course maintenance.

For both organisations, this important development will further enhance their significant independent successes in this area and combine two leading industry names to maximise opportunities and aid innovation.

For staff in each organisation, this will also see significant value investments designed to create new professional development and learning opportunities, in addition to supporting a wide range of charitable and apprenticeship programmes, including Carnoustie’s 250-strong junior golf development hub The Carnoustie Craws.

Today’s announcement is a meaningful new chapter in Carnoustie’s story and sees the merging of two historic organisations. Carnoustie held the first of its eight Open Championships in 1931, but it was long before this that a great many young clubmakers, golf professionals and greenkeepers (known as The Carnoustie 300) left Carnoustie to take golf worldwide, helping to change the face of the game forever.

This eight-time Open Championship venue is known for delivering change in the game of golf and is held by many to be the ancestral home of American and Australian golf.

“Our goal was to conceive a partnership based on shared values that went well beyond the provision of greenkeeping equipment,” said Carnoustie Golf Links Chief Executive Michael Wells. “Carnoustie and John Deere can now work together to lead the conversation as the golf industry looks to modernise its approach to golf course management, with a partnership that will focus on innovation and development.”

John Deere’s European Golf & Turf Sales and Marketing Manager Carlos Aragones added: “John Deere is fully committed to the manufacture and support of advanced, high quality equipment for the world’s best golf courses. We will be honoured to see our machinery at work on the Championship, Burnside and Buddon Links Courses at Carnoustie Golf Links, and look forward to establishing a close and fruitful partnership with this historic club.”

About Carnoustie Golf Links:
Most recognised as ‘Golf’s Greatest Test’, Carnoustie’s challenging links has a fascinating history which dates back to the 1500s. Ever since then golf has grown at Carnoustie as the small town at the mouth of the Barry Burn has left an indelible legacy on the game around the world.

Carnoustie Golf Links boasts three courses, the Championship Course, Burnside Course and Buddon Links Course. In 2018, Carnoustie Golf Links was awarded Environmental Golf Course of the Year. In 2019 it was named as the World’s Best Golf Course at the World Golf Awards and won best overall golf experience at the 2019 Scottish Golf Tourism Week.
The Championship course has hosted The Open eight times, The Women’s British Open in 2011 and The Senior Open Championship on two occasions, in addition to hosting The Alfred Dunhill Links Championship annually.

About John Deere:
Deere & Company (NYSE:DE) is a world leader in providing advanced products and services and is committed to the success of customers whose work is linked to the land – those who cultivate, harvest, transform, enrich and build upon the land to meet the world’s dramatically increasing need for food, fuel, shelter and infrastructure. Since 1837, John Deere has delivered innovative products of superior quality built on a tradition of integrity. For more information, visit John Deere at its worldwide website www.JohnDeere.com.

John Deere has been the Official Golf Course Equipment Supplier to the PGA TOUR since 1997, providing equipment to its network of Tournament Players Clubs and Courses (TPCs). Since 1998 the company has been title sponsor of the John Deere Classic tournament, which has raised many millions of dollars for community and charitable organisations. John Deere has also been the official supplier of golf course machinery to the Ladies European Tour (LET) since 2007, a Patron of and supplier to The Solheim Cup, and at the beginning of 2017 was named Official Golf Course Turf Equipment Provider to the PGA of America.