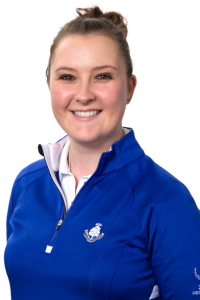 After deciding to pursue a career in golf, she started her PGA training at Holywood in 2011 under Stephen Crooks.

Rebecca joined the team at Carnoustie in April 2014 where she completed her PGA training.

In 2019, Rebecca became the Head of Merchandise at Carnoustie Golf Links.

Other interests: Rebecca enjoys playing golf socially and playing new courses, going for walks in the mountains and exploring new places, sightseeing and travelling and enjoys socialising with friends and visiting family back home in Holywood.

Nathan was born and brought up in Perth. He started golf at the age of 9 and was a junior at Blairgowrie Golf Cub.

After completing high school, Nathan travelled north and studied a BA Golf management degree in Dornoch with the University of Highlands & Islands. During that time he also competed in the Scottish Universities Championships for the UHI team.

Upon gaining his BA Degree, Nathan started his Professional Golf Association traineeship at the Alister MacKenzie designed Duff House Royal in Banffshire where he was based for 5 years. An experience that he will forever remember as his starting point in the golf industry.

Once he became a fully qualified member of the PGA, Nathan moved to work at the exclusive private members facility, Renaissance Club, in East Lothian. As part of his time there he developed the golf operations team, grew the junior golf programme and ran the members annual championships. He was promoted to the role of Head Professional after 2 seasons and oversaw co-hosting the Boys Amateur Championship with neighbours Muirfield, a European Tour Seniors Open and Final Qualifying for The Open Championship. Nathan left Renaissance to work in the merchandise department at St Andrews Links before the opportunity to work at Carnoustie became available.

Other than his time in Scotland, Nathan has enjoyed golfing in the United States, Mexico and the Middle East.

In 2019 Nathan joined the team at Carnousite Golf Links. He is immensely proud to part of such a world renowned golfing landmark.

Other interests: Nathan has an interest in all sports but in particular: Skiing, cycling, tennis and football.  He also has a great passion for fashion and film and likes to spend time with his family & friends when time allows.